In 2010, Lynn was approached by the Art Gallery of Sudbury in Ontario, Canada. 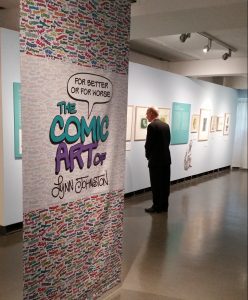 They were interested in creating a travelling exhibit of Lynn’s life and cartooning career. In 2015, the retrospective became a reality. The show was titled, The Comic Art of Lynn Johnston. 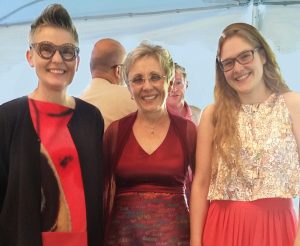 It showcased Lynn’s art from early childhood all the way up through her cartooning career. The show followed the timeline of her life, and it was decided that the story should end with what Lynn was up to now that she had retired from the comic strip.

With the help of her good friend, seamstress and fashion designer, Kathryn Brenne, Lynn’s designs came to life on a sample line of clothing designed by Kathryn’s apprentice, Malia Janveaux. Only one of each outfit was made, but Lynn hopes that someday she will see some of her patterns on fabric and in retail stores. (Photo L-R: Kathryn, Lynn, Malia)

Below is a video that was created for the Sudbury gallery show (this video has sound, so you may wish to adjust your volume). See Lynn’s foray into fashion: